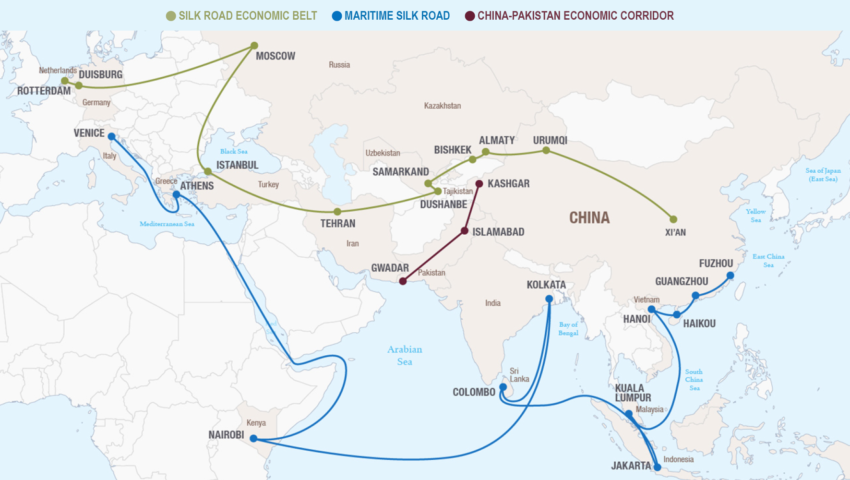 China’s Belt and Road Initiative is designed to improve the infrastructure of land and maritime routes in Eurasia in order to drive trade and capital flows between east and west. The Initiative will connect China and more than 65 other countries along land and sea routes from Malaysia to Eastern Europe. Investment of more than 900 billion US dollars is already committed to building infrastructure networks.

The road to the future world economy

The Belt and Road Initiative was officially launched in 2013 by Chinese President Xi Jinping, whilst on his visit to Central Asia and Southeast Asia in September and October. President Xi raised the initiative for jointly building the Silk Road Economic Belt and the 21st-Century Maritime Silk Road. The concept draws from the historic Silk Road and offers a modern-day solution to foster global economic development in the 21st century.

President Xi coins the initiative as ‘A Project of the Century’. His vision provides a blueprint for China to take up a leading role in globalization, promoting connectivity and strengthening cooperation along the regions of the Belt and Road globally via jointly built infrastructures, investments, consumption and job creation. The routes cover more than 65 countries and regions from Asia to Europe via Southeast, South Asia, Central Asia, West Asia and the Middle East. Currently, these countries and regions account for an estimated 29 % of global GDP and more than 35% of the world’s merchandise trade. By 2050, the Belt and Road region aims to contribute 80% of the global GDP and advance 3 billion people in the region into the middle class.

The initiative is open to all countries to engage in it and not exclusively limited to the countries and regions along Belt and Road.  For global businesses – from multinationals to small-and-medium-sized enterprises – it offers unparalleled opportunities to tap into new markets along Belt and Road and gain deeper access to markets in the Chinese mainland, ASEAN, the Middle East, and Central and Eastern Europe. For developing and emerging economies in these areas, investment and trade accelerate development for the benefit of all.

The Vision and Action Plan

Vision and Actions on Jointly Building the Silk Economic Belt and 21st century Maritime Road was issued by the National Development and Reform Commission, Ministry of Foreign Affairs and Ministry of Commerce of the People’s Republic of China in 2015.

The Belt and Road Initiative aims to connect Asia, Europe and Africa along five routes.

Concentrating on the above five routes, Belt and Road will take advantage of international transport routes as well as core cities and key ports to further strengthen collaboration and build six international economic co-operation corridors. These have been identified as the New Eurasia Land Bridge, China-Mongolia-Russia, China-Central Asia-West Asia, China-Indochina Peninsula, China-Pakistan and Bangladesh-China-India-Myanmar.

Policy co-ordination
Countries along the Belt and Road will jointly consult upon the formulation of development plans and measures of cross-national or regional co-operation, resolutions for co-operation problems and policy supporting practical cooperation and large-scale project implementation.

Facilitating connectivity
A construction of international passageways is to be established as an infrastructure network connecting various Asian sub-regions with other parts of Asia, Europe and Africa. There will be a priority given to removing barriers in the missing sections and bottleneck areas of core international transportation passages, construction advancements in port infrastructure facilities and clearing land-water intermodal transport passages. The infrastructure related to the facilitation of connectivity, including railways, highways, air routes, telecommunications, oil and natural gas pipelines and ports, will also be promoted, with precedence for green and low carbon infrastructure construction and operation management.

Unimpeded trade
Favourable steps to facilitate trade and investment will be actioned. Specifically, the aspects include reducing investment and trade barriers, lowing trade and investment costs, as well as to promote regional economic integration. Efforts will also be made to broaden the scope of trade, propel trade development through investment, and strengthen cooperation in the industry chain with all related countries.

Financial integration
Integral to the Belt and Road Initiative is co-ordination of monetary policy. Particularly emphasis shall be made to expand the scope of local currency settlement, currency exchange in trade and investment between countries along the route, deepen multilateral and bilateral financial co-operation, set up regional development financial institutions, strengthen regional co-operation in monitoring and enhancing mechanisms to manage financial risks.

People-to-people bonds
Exchange dialogue between different cultures shall be promoted to form a basis for advancing cross-regional cooperation. Specifically:

The Belt and Road Initiative endeavours to jointly develop the program through consultation with all interested parties. Existing bilateral and multilateral agreements will be utilised to promote and implement the developing strategies of the interested countries along the route. Steps will be taken to advance the signing of cooperation memorandums or plans for the establishment of bilateral cooperation demonstration projects. Equally a bilateral joint work mechanism is to be established to devise an implementation plan and action roadmap for the advancement of the Belt and Road strategy.

Financing the Belt and Road Initiative: The Silk Road Fund

The US$40 billion Silk Road Fund has been established to finance the Belt and Road Initiative, mainly within infrastructure and resources, as well as in industrial and financial cooperation. In December 2014, the Fund was incorporated as a limited liability company and the founding shareholders include China’s State Administration of Foreign Exchange, China Investment Corp, Export-Import Bank of China and China Development Bank.

AIIB is a new multilateral development bank (MDB), with an authorised capital of US$100 billion and incorporated to cooperate with the existing MDBs to address infrastructure needs of Asia. AIIB will focus on lending funds to companies developing infrastructure and other productive sectors in Asia, including energy and power, transportation and telecommunications, rural infrastructure and agriculture development, water supply and sanitation, environmental protection, urban development and logistics.

The AIIB Articles of Agreement entered into force on 25 December 2015. On 16 January 2016, the Board of Governors held an inaugural meeting and declared the Bank open for business.

In May 2017, a list of 270 achievements was announced at the Belt and Road Forum. The list comprised of memorandums and cooperation agreements on close policy communication, infrastructure projects, trade openness, financing connectivity and improvement of people’s livelihood.

The Belt and Road Initiative is set to reinvigorate the seamless flow of capital, goods and services between Asia and the rest of the world. Through connecting developed and developing countries, China is seen to be reshaping the world trade and globalisation path, taking a stance to lead further market integration and forging new ties among communities.

Although protectionists and sceptics may brush a negative light, the recent Chinese government guidelines for China overseas investments, to be led by the Belt and Road Initiative, furthers China’s support in the initiative. Equally, there is no shortage of companies of all sizes keen to be a part of Belt and Road and not miss out on the world’s largest trading collaboration.

Still, such a bold move will call for a new kind of Chinese investor, one savvier in cross-border transactions than in years past. To take advantage of the full breadth of the Belt and Road Initiative, investors will increasingly rely on innovative, global-minded corporate advisory and its professional services to help realise their aspirations for being not only world-reaching but world-leading in their business endeavours.

You can view the full official text of the original action plan on the China-proposed Belt and Road Initiative by following the link.

Post by Li Huajing, Horizons China contributing writer and editor to The Square. If you would like more information about the Belt and Road Initiative or other related issues, send us an email at talktous@horizons-advisory.com, and we’ll have a Horizons professional contact you.